Here is an interview British Sea Power did with Miloco during a 2007 session in The Engine Room with Graham Sutton.

What project are you doing here at Miloco (e.g. recording, mixing or remixing/single tracks or album) and when’s it due to be released?
Mixing the final few songs for our newest album. Songs – “All In It”, “Nature Time with Johnny Kindom”, and “A History of Light”. It will be released on 8th October.

Which Miloco studio are you using and why did you choose it?
Miloco 1 (The Neve). We diidn’t finish mixing in Prague and Graham wanted to come here. He says “I can trust the room. Innit.” “Miloco is great, Innit.”

Please describe The Neve in one line:
It is quite big and got lots of buttons and Graham gets on well with it. Graham says, “I like the Neve innit.”

How would you describe the material you are working on?
Bootiful. Almost as good as Johnny Kingdom. Graham says, “Yeah I just fuckin love it innit.” “Innit or something.”

How did the working relationship with Graham Sutton come about, and what do you feel he brings to the project that other producers wouldn’t?
We recorded most of the album in Montreal at Hotel 2 Tango in November 2006 and tried mixing it over there in January 2007. The mixing didn’t work out over there so we got Graham involved. He produced 2 songs off our last record so we knew he could twiddle the right knob and press the right buttons. Graham says, “It’s horses for courses or something. Innit”

The song you wished you’d written:
Both theme tunes to ‘Only Fools And Horses’

What’s the strangest rumor any of you have heard about yoursleves?
We live in a tree + that Hamilton has 12 toes (not including the large toe) and that Yan has pinecone teeth.

What’s the worst behaviour you’ve ever witnessed at a gig? (Can be your own/someone else’s/ a combination of both…)
Some girl who came to see us in Prague was touching herself during the show, and ended the night covered in her own fecal matter and vomit.

You are placed in front of a time machine. Which year in history would you travel to and why?
Go back and record some songs with Joe Meek or get the sportsalmanac and go betting. 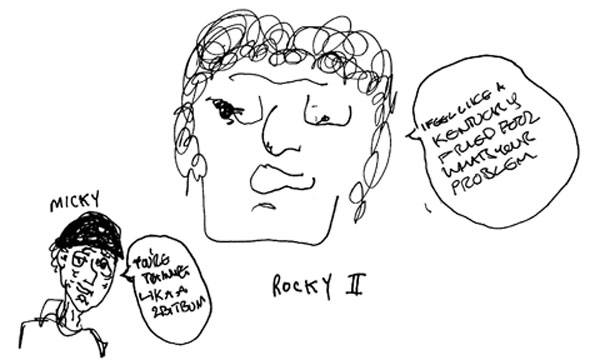 British Sea Power were speaking to Miloco in July 2007.