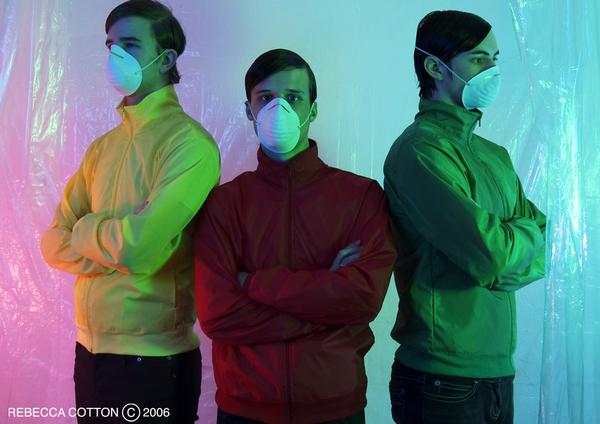 Before the platinum-selling era of the mighty White Lies Harry McVeigh, Charles Cave and Jack Lawrence-Brown were known as Fear Of Flying. They swung by Miloco in Autumn 2006 to remix a single with engineer Max Dingle. Here is an interview they gave at the time.

A) The facts: A1) What material did you record here at Miloco?

Fear of Flying: We didn’t actually record anything. We were having our demo re-mixed by an engineer named Max Dingel.

A2) When is it due to be released?

FOF: The A/A single entitled Three’s A Crowd/Forgetmenots is to be released on December 4th.

A3) Are there any guest artists on this project/are you collaborating with anyone?

A4) How would you describe the music you’re making at this moment in time?

A5) How long did you spending here at Miloco?

FOF: Only two days worth of remixing.

A6) Have you recorded here before?

A7) What do you like about Miloco and what do they seem to offer differently from other studios?

FOF: Nice sweets in the kitchin area. Feels comfortable all around.

A8) Please describe Miloco in 12 words…

FOF: This Is Where A Man Made Our Music Sound Like Heaven.

B1) What was your favourite album when you were:

B2) If you could have been involved in the writing or recording of any one album, which one would it have been?

B3) What is your favourite album cover and why?

B4) Which other band or solo-artist has influenced you most over the last 12 months?

D1) Who would win a fight between… a croissant and an apple turnover? And why?

FOF: God [regrettably neither the croissant or apple turnover qualify for the next round. Ed]

E1) Which is the best gig you’ve ever been to?

E2) What’s the worst behaviour ever witnessed at a gig (your own, someone else’s, on/off/back stage)?

FOF: Uno. [Editor assumes behaviour witnessed at band’s own gig is nominated as worst, but that they’re unwilling to divulge to the gruesome details.]

Thank you very much for submitting yourself to the Miloco Magazine inquisition; your time, effort and patience is much appreciated.

F1) Before signing off, is there anything else you’d like us to know?

FOF: Fear Of Flying are going to make a wonderful album.

Fear of flying were talking to MILC in the autumn of 2006.