Back in the late Summer and Autumn of 2007, Long Blondes were making their second album ‘Couples’ in The Garden with producer Erol Alkan and engineer Jimmy Robertson. The Sheffield indie 5-piece briefly spoke to Miloco about the sessions and more.

Miloco: What project are you doing here at Miloco (e.g. recording, mixing or remixing / single tracks or album) and when’s it due to be released?
LONG BLONDES: Our second album. Hopefully it will be released in March ’08.

Miloco: Which Miloco studio/s are you using?
LONG BLONDES: The Garden

Miloco: How did the working relationship with Erol Alkan come about, and what do you feel he brings to the project that other producers wouldn’t?
LONG BLONDES: We’ve known Erol for a couple of years. We had a mutual appreciation of each other’s work and it seemed natural to work with someone who had ideas and was enthusiastic, as opposed to the usual “megabucks” producer who’s never even heard your songs…

Miloco: What’s the strangest rumour you ever heard about yourself?
LONG BLONDES: That Screech is really called Mark. Ridiculous!

Miloco: You are placed infront of a time machine. Which year in history would you go to and why?
LONG BLONDES: 1981 – Adam and the Ants and Diana Dors. Two of our biggest influences. But, seriously, they didn’t need to do that video for “Stand and Deliver”. We could have told them 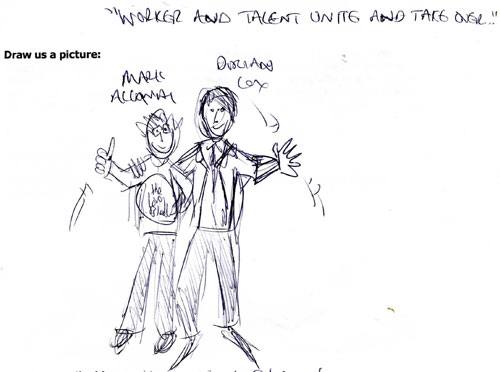 Miloco: Any additional information you’d like to let us know about?
LONG BLONDES: We’ve been to Miloco a few times and, quite frankly, we can’t see why a band would use any other studio.

The Long Blondes were speaking to Miloco in November 2007.