Following on from the success of their last EP, Harper Lee and the critically acclaimed single, The John Wayne, the band are sure to reach new heights with this release. Similar to The John Wayne, this debut also conjures up a sense of vulnerability teamed with a young naivity that makes Little Green Cars so appealing.

Set for release this August, the record is brimming with generous five-part harmonies over a classic foundation of Country and Folk-Pop, inspired by the likes of Fleetwood Mac, R.E.M and hints of The Mammas And Pappas in their vocal structures.

Produced by Markus Dravs (Bjork, Arcade Fire, Mumford and Sons) and recorded at Miloco’s Angelic Studio by Robin Baynton (assisted by Tom Fuller), Absolute Zero is a beautiful set of songs; a lyrically frank, musically contrasting and intimate perspective on growing up. Lead singer, Stevie Appleby, describes the album as having “two contrasting perspectives: the beauty of a reckless youth and the fear and confusion caused by our ever-pending adulthood”.

Lead track and single, Harper Lee, is a cascade of acoustic guitar, swelling vocals and a driving chorus, with Appleby’s voice – often likened to Folk legend, Neil Young – taking the forefront. With his distinguishable Celtic tones, hints of early Biffy Clyro creep into Angel Owl, whilst My Love Took Me Down To The River To Silence Me, showcases Faye O’Rourke’s rich and defined vocal; a welcome contrast to the otherwise all-male line-up.

The Consequences of Not Sleeping is a standout track, with snippets of stunning finger-picking, reminiscent of a Red Hot Chili Peppers lick – you’ll know when you hear it. Another popular track is Big Red Dragon; one of the more Indie tracks on the album with tales recounting a drug trip, it features lashing piano chords, jaunty guitars and backing vocals employing glorious harmonies. Red And Blue is perhaps the record’s most unexpected song, composed solely of an arpeggiated synth and errie-sounding auto-tuned vocals, simiar to Imogen Heap’s Hide And Seek.

Again, O’Rourke’s standout vocals are highlighted in The Kitchen Floor; a solo effort from the singer and perfectly complimented by minimalist and a seamlessly balanced accompaniment. But perhaps the best track on the album by far is the previously mentioned, The John Wayne. Beginning with a steady, almost lazy bass drum beat and inflections of melody in the bassline,  Appleby and O’Rourke’s voices enter with the line ‘It’s easy to fall in love, it’s easy to fall in love with you”. The verses build slowly and brilliantly, before the guitar kicks in and a real rock energy is revealed. It’s hugely catchy and is the pinnacle of an extremly well written and produed record. 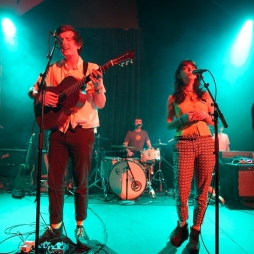