Earth is the debut solo album from Radiohead guitarist Ed O’Brien, aka EOB. 8 years in the making, O’Brien took inspiration from the country of Brazil, specifically Carnival, stating “I was very influenced by Brazilian culture. We experienced Carnival in Rio and that’s just the most extraordinarily huge celebration of being a human being walking on this planet. It’s this beautiful kaleidoscope of rhythm, melody, life, love, open-heartedness… Suddenly this music starts to come out and it was one of the most powerful feelings I’ve ever experienced. It was totally absorbing and it’s taken over my creative life.”

Musically speaking, there are shades of Radiohead here and there, whilst an eclectic mix of guest musicians, including Omar Hakim, Nathan East & Dave Okumu (The Invisible), Laura Marling, Adrian Utley (Portishead), Glenn Kotche (Wilco), combine to give the album its own unique feel.

The album was produced by Flood and Catherine Marks, with much of the record being recorded at Assault & Battery 2 in Willesden. It was mixed in Assault & Battery 1 by Alan Moulder and Caesar Edmunds, engineered by Adam “Cecil” Bartlett, and assisted by Tom Herbert and Richie Kennedy, whom also performed drums, percussion and synthesiser on the record.

Click the badge in the header to listen to Earth on Apple Music, or stream on Spotify below. 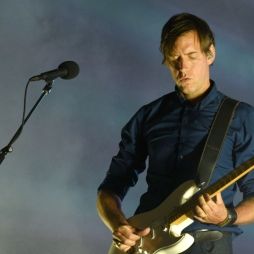