Brasstracks are a New York-based duo who fuse brass and hip-hop to create a uniquely soulful sound. Having collaborated with and produced for artists such as Robert Glasper, Chance The Rapper, Goldlink and Jay Prince, they released their debut studio album Golden Ticket in August 2020.

They headed to Willesden Green in September 2019 to spend a week at Assault & Battery 2, where they recorded the tracks “Movie ft. Ady Suleiman”, “Missed Your Call ft. Col3trane”, “Guidelines ft. J. Hoard”, and lead single “Change For Me ft. Samm Henshaw”.

The tracks were all self-produced by the duo, engineered by in-house engineer Richie Kennedy, and assisted by in-house assistant Ed Farrell.

Click the badge in the header to listen to Golden Ticket on Apple Music, or stream on Spotify below. 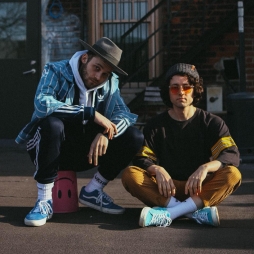