No Sound Without Silence

The Script‘s fourth record No Sound Without Silence catches the Irish band departing from the soulful production of 2012’s #3 and returning to the pop/rock of their earlier records.

Displaying the genius of lead singer/songwriter Danny O’Donoghue, guitarist Mark Sheehan, and drummer Glen Power, No Sound Without Silence was produced by the band together with help from previous collaborator Andrew Frampton and producer/songwriter Jimbo Barry.

Partly recorded at Sofa Sound, a studio on the Miloco roster, the record boasts a natural feel, which is well matched to the live show.

For the most part, the same vocal chain was used for everyone: Neve 1073DPA stereo mic preamp to Empirical Labs EL8 Distressor, straight into the Apogee Symphony I/O audio interface. A lot of songs began in a mobile studio, and during the very mobile phases migration to the Universal Audio Apollo Twin interface made life very easy.

The biggest variable was choice in microphone. O’Donoghue’s go to unit is the sE Electronics Gemini II dual valve microphone. Also, the Neumann U 87 always got a lot of use. In fact, on one of the songs the majority of vocals were recorded on a U 87 in the vocal booth on the bus.

“Hugh Padgham [world renowned record producer] at Sofa Sound had what looked like an old AKG C414,” said Barry. “We used that a lot on Dan’s background vocals and one or two lead vocals. We convinced ourselves it was from his days working with Sting. Of course we have zero evidence to back this up.”

Working quickly and being able to capture things on the fly was critical. A lot of the recordings that happened during the writing process made it all the way to the end. It was important to be able to record at a moments notice when someone was feeling a vocal or instrumental part. The challenge was getting a good sounding signal without taking too much time getting in the way and ruining the creative flow.

“To combat this we left a lot of our instruments set up and ready to record, as much as we could,” said Barry. “In Sofa Sound we constantly had a full drum kit, piano, and guitars/bass set up, as well as vocal mics both in the live room and in the control room. If someone had an idea they wanted to put down it meant there was no fuss in trying to get set up to record. You could just dive straight in.” 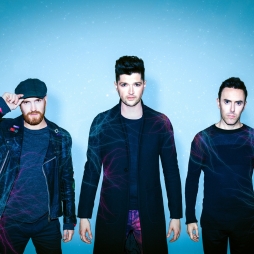 Read more about The Script