Mali rockers Songhoy Blues are back with their second album, Résistance, a follow up to their 2015 debut, Music In Exile. Having fled their home country in 2012 their aptly titled albums have earned the four-piece band worldwide recognition and a packed touring schedule.

Neil did a week of pre-production in writing studio The Bridge, working on demos with the band, some of which ended up as final versions on the album. Recording was done in our flagship live room, The Pool, where Neil and Jamie tracked most of the songs live to retain the band’s live energy on the recorded versions.

With Neil producing the album, he and Jamie split the engineering duties holing up in separate studios for overdubs. Jamie recorded guitars, bass, horns and some percussion in The Pool, whereas Neil tracked vocals, keys and more in his private studio in the same building, which is where he also mixed the album following recording.

With a backstory as colourful as their music, Songhoy Blues have managed to create their own brand of energetic, joyous and eclectic guitar-driven blues that have attracted fans from all over the world. They can count among them music legend Iggy Pop, who features on the track ‘Sahara’, as well as up-and-coming London emcee Elf Kid, who lends his rhymes to ‘Mali Nord’. 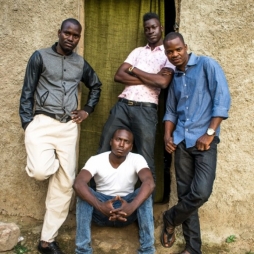