Viva La Vida or Death And All His Friends

Coldplay return once again to bid for all the top honours as standard, with one of the biggest releases of the year. Viva La Vida or Death And All His Friends, whichever title should take your fancy, looks set to see the band reach further commercial milestones, with a cool 300,000 copies sold within three days of release in the UK alone.

The album was co-produced by Brian Eno and Markus Dravs, and was brought to Miloco’s Yard and Muskibox in late 2007 and early 2008. You can read Miloco’s interview with Markus Dravs here. 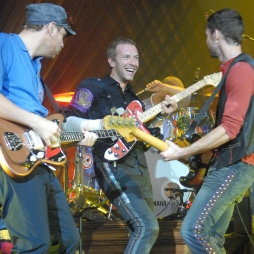