My Love Is Cool

“Everyone kept telling us we were so eclectic and incapable of being pigeonholed,” says Theo Ellis (bass). “The album is an expression of our sound, cross-pollinated by what’s come before. A consistent representation of those ideas.” Ellie Rowsell (guitar/vocals) scoffs. “You’re too eloquent for your own good, Theo.” Theo: “Fine, the drums are fucking sick. I love it.”

The band went into the studio with 20 songs, spanning from three years to a few weeks old, last November for five weeks. Only two of their previous releases – ‘Fluffy’ and ‘Bros’ – are on the final 11-track LP, Ellie insistent that the rest of their catalogue has already lived its life. Their decisions around which songs would make the cut were based simply on the ones they still had feverish performances for. 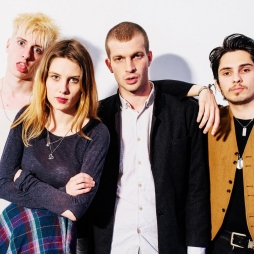