They formed a band, released a string of brilliant singles and a brilliant debut album, then packed their worldly possessions into suitcases and set off to conquer the world. Now, Art Brut return with a new single, a UK headline tour and a freshly inked deal with Labels / Mute Records. Art Brut were recording Nag Nag Nag Nag and a b-side in the Garden with producer/engineer Dan Swift during september 2006 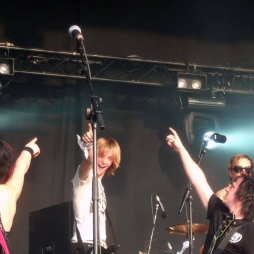