Push The Sky Away

The fifteenth studio album by Aussie alternative rock icons Nick Cave and the Bad Seeds, Push The Sky Away, is the first without founding member Mick Harvey and the first with Barry Adamson since 1986′s Your Funeral… My Trial.

Featuring the singles ‘We No Who U R’ and ‘Jubilee Street’, Push The Sky Away is described by Cave as such; “if I were to use that threadbare metaphor of albums being like children, then Push The Sky Away is the ghost-baby in the incubator and Warren’s loops are its tiny, trembling heart-beat” – an indication of multi-instrumentalist Warren Ellis’ ever increasing influence on the Bad Seeds dimensional sound.

The album was produced by Nick Launay and recorded at La Fabrique residential recording studio in South France. 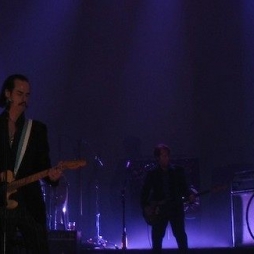 Read more about Nick Cave And The Bad Seeds