Having thrown caution to the wind and abandoned good old Rock and Roll, it seems Arcade Fire have seen the light with some help from a few friends. Partly responsible for the band’s makeover record are James Murphy (LCD Soundsystem), Craig Silvey (who mixed 4 tracks) and Markus Dravs. Throwing in awash of infectious rhythms and classic disco/pop influences, the result is sharper and slicker than anything the band have produced before.

From the bouncing synth lines in lead track, Reflektor, to the ‘Billie Jean’ bass line in We Exist and numerous funky guitar licks, this album is alive and exciting.

Track, Normal Person, which features on disc 1, opens with a vocal introduction asking, ‘Do you like Rock’n’Roll music? Cos’ I don’t know if I do’ – all part of the statement Arcade Fire are trying to make. Made up of playful, plinky-plonky piano comping and distorted guitar riffs, it’s almost as if they are trying to creep back into the Rock realm with each pounding drum hit, still cleverly keeping it upbeat and on the right side of ‘danceable’.

Closing Reflektor is Supersymmetry; a blossoming soundscape of electronic sounds, exotic percussion and soothing, ethereal vocals in male/female unison harmonies. As a final nod towards their new found Dance sensibilities, the tempo picks up, the beat drops and swirling synths fade out. 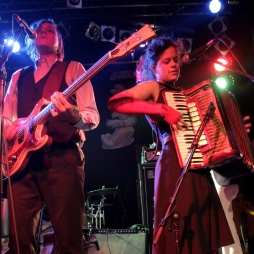