J-Bo and co return for another onslaught of their epic, radio-friendly indie rock. Now in the fine company of Arctic Monkeys’ producer Mike Crossey, we’ve been told to expect a much rougher and edgier Razorlight, with their brilliant third album, ‘Slipway Fires.

Mike Crossey mixed ‘Slipway Fires’ in The Engine Room at the end of the summer 2008. 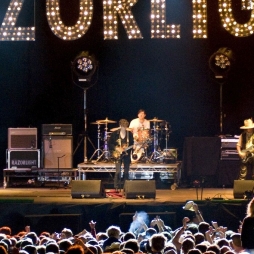