Songs Of Innocence is U2’s thirteenth studio album and after ever-changing release dates, the album is now out and can be downloaded for free via the iTunes Store. The announcement was made yesterday at the Apple iPhone 6 and Watch Launch in California and the album was later given to over half a billion iTunes customers throughout last night in 119 territories, possibly making this the largest album release in history. The record will then go on general release on 13th October.

Songs Of Innocence is one of the first commercial releases to come from the renovation and rebirth of Paul Epworth’s (Adele, Coldplay, Florence And The Machine) Church Studios in Crouch End. The album was part recorded in the main Neve room there and was partially produced by Epworth as well as part mixed and engineered by Miloco’s Matt Wiggins. Super-producer Flood also contributed to the production of the album, with parts bring done at Miloco’s Assault and Battery 2 Studio.

Understandably, rumours of U2 recording a new album escalated quickly with Crouch End residents especially becoming ever-more excited about the news. Songs Of Innocence follows 2009’s number one album No Line On The Horizon, so after a five year wait, what can U2 fans around the world expect?

Well, described by Bono, the Irish veteran band’s frontman, this record is their “most personal” offering yet, but you’ll be glad to know, it still sounds like U2.

Songs Of Innocence kicks off with album opener The Miracle (of Joey Ramone) (part-mixed by Matt Wiggins). It’s an upbeat stadium-filler with choruses of ‘oh-oh-oh’s’ which you can already hear blasting through crowds of thousands at their inevitable sell-out gigs.

The great thing about this new record is the distinguishable and classic U2 sound that emanates, whilst still managing to introduce modern elements to the tracks. 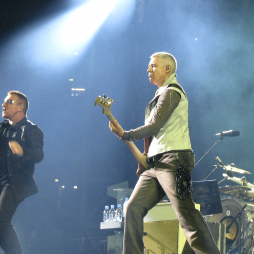 Read more about U2