Aussie four-piece, The Jezabels, are back with their second album The Brink. Self-labelled as ‘Intense Indie’ music, the band worked with producer Dan Grech-Marguerat at various Miloco Studios on this release.

The record is very much still The Jezabels in style and sound, confirmed by opener and title track, The Brink; an anthemic, synth-heavy number. Lead singer Hayley Mary shifts from soft, breathy vocals to strong and assertive wails as she fights to compete with a bombardment of drums and arena-style guitars throughout.

Look of Love is a more upbeat, dance track with bouncing synths and prevailing guitars. Even with the disco elements, their rockier roots still manage to seep through, particularly in the big choruses. The Angels of Fire introduction is a contrasting, yet balanced mix of irregular synth interjections and hand claps whilst elegant, suspended chords lay the foundations for the rest of the track.

Their coining of the genre ‘Intense Indie’ is certainly apt. Tracks are brimming with power and authority and the melancholic lyrics in The End – ‘Is this the end of a life worth living?’ are all-consuming, almost overwhelming at times. The record as a whole is largely familiar and comforting but with a newly sought glossy presentation and production.

The Jezabels recorded drums at Miloco’s The Pool and The Bridge studios and was mixed at The Engine Room. The record was produced and engineered by Dan Grech-Marguerat and was released on 14th February 2014 through PIAS. 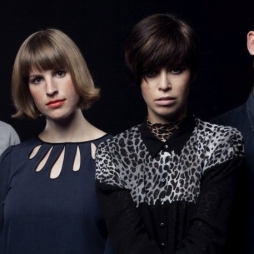 Read more about The Jezabels