After three years in the making, this L.A four-piece are back with their second full-length album. Staying true to form, the self-titled record is the perfect indulgence of ethereal trip-hop, lush instrumental layering and expansive vocals.

Often compared to the likes of Portishead and Massive attack, Warpaint’s sound has evolved somewhat for this effort, though. With the help of renowned U2 collaborator, Flood, mixing and co-producing the album with the band, a new rhythmic dimension has been found, building on skeletal guitar lines and the female quartet’s haunting voices.

With tracks like Keep It Healthy, the bass takes centre stage along with track, Biggy, where the opening melody hits the listener hard with rumbling synths penetrating and resonating throughout. CC is a ominous three and a half minutes of brooding bass lines, menacing chords and hazy harmonies and demonstrates exactly the epitome of Warpaint’s new sound for this album – a darker, more self-assured offering.

Disco/Very is a slight U-turn for the band, with crisp, assertive drumbeats and a polished production – much more so than with the rest of the albums purposefully airy tracks. Beginning with fairly minimalist accompaniment, focusing on the chant-like vocals, the track gradually builds its layers causing intrigue and interest until the end.

It’s easy to lose yourself in this record, particularly with such hypnotising tracks like Go In, the trip-hop beats of Hi and the forlorn lament that is Son. With laid back grooves and the gentle lulls of subtle chord changes and mesmerising vocals, Warpaint is a beautifully lingering record, pulling you in and comforting you like a big musical, metaphorical hug. 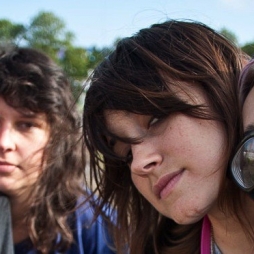