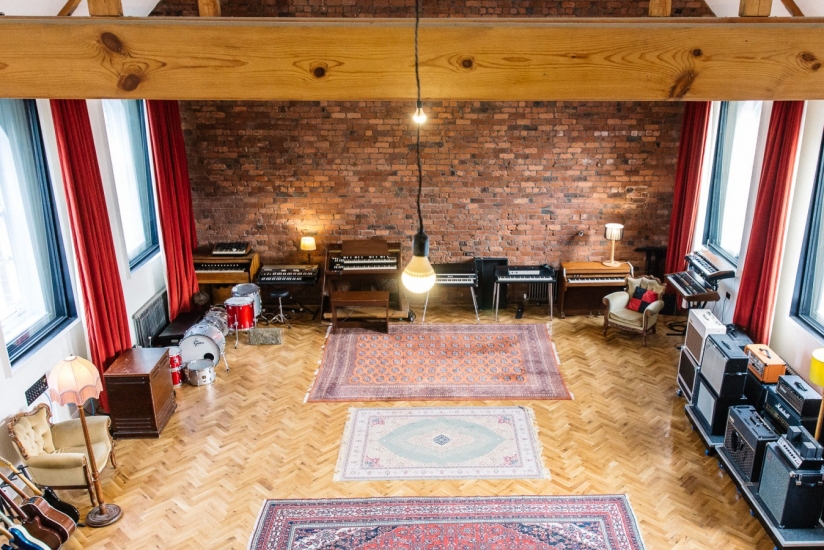 The Nave is a three studio complex built into a 19th century Methodist church in Leeds. Conceived and built by Matt Peel, Andy Hawkins & Nick Baines, the studio has already grown beyond its initial beginnings. What was originally designed as a space for producers Matt & Andy has now become a home for other resident producers and audio technicians in Leeds, forming a mini musical community.

Andy & Matt met over 10 years ago when Andy needed somewhere to record a band in Leeds and ended up booking the studio that Matt was running at the time. They worked on the session together and quickly bonded over gear, records, bands and techniques. Nick, also known as Peanut from Kaiser Chiefs, met Matt around the same time at a venue in Leeds when Matt was working as a live sound engineer there and Nick was pulling pints. Similar techy conversations took place over the bar and shared visions of future studios were formed.

Nick went off on tour and Matt & Andy ended up running that studio successfully together for a number of years, making many great records and bolstering their production credits. In 2011 they bought a church together and after three years of building and development work, The Nave opened in November 2014.

The three of them pooled all of their equipment and that has led to The Nave being host to a wonderful collection of multitrack recorders, outboard, keyboards and guitars. The aim at the Nave is that all three studios work together to be both affordable and luxurious. Matt and Andy have worked with many alternative bands over their careers, plenty of whom started out on the DIY scene. This led to the pair wanting to create a studio where they not only had a no compromise tracking environment, but also a more affordable overdubbing space plus a great writing/demo room. The Nave offers this all inside one building and allows each band to make the most of their recording budget.